Astor got pushed by his sister on a trip to Heavenly Mist, a mountain with romantic legends.  As he accidentally got in to a strange place, his only companion a mysterious man, what would be the outcome of this encounter?

Added a new CG that could be unlocked after finishing all the endings.

Added a behind the scene Art pack. The pack containts the following:

Sorry for the long wait as the old proofreader was busy, but my new editor Kusoneko did an amazing job in fixing up the script!

Updated: 27/6/2021: It had been much longer than I expected and the game bloated so much from the original scope. In this update everything are basically done but there is still a few issue because I rushed this for Yaoi Jam Plus:

-script is still unedited, I will update  after my proofreader finish it.

-CG gallery is not ready. It could be a problem to keep track of your progress, but the game has few choices so it's pretty straightforward.

-web build is pulled because too heavy.

Have fun playing and please forgive my bad English for now TvT.

Updated 17/3/2021:  With the amazing help of Sznymo, the demo is now available in Polish. Because I wanted to draw a few more CG, the full game will be delayed to the end of March.

- Demo release 1/3/2021: This is an impulsive project  I got an idea of that fit perfectly for Valentine  VN Jam, so I just have to make it. Since I started the project on 13 Feb that is already halfway through the Jam, I couldn't make it in time and had to make a super early demo to submit to the Jam. This is going to be a very short game. I had finished most of the art assets for this game, some not included in this demo because the full script is not finalized. The full game should be expected to be up in 1 or 2 weeks.

- UI created by the fabulous Foleso

- Polish translation and language mod for the old Demo by Sznymo

does this have smut?

Pretty cool game. Got all 3 endings. Muted all sounds cause it was creeping me out (am easily scared.) also the forest stuff scared me too, as well as the [redacted], [redacted]....

(The redacted are just spoilers kinda. Most probably wouldn't be scared of them.)

Thank you! I'm  happy you enjoyed the game!

So, anime broke back mountain ?

Not quite, it's  just a silly fantasy  story xD

This is a nice game.

Good thing I came back here after a year xD im happy to see that there is a new cg <3 thankies. I really enjoy playing this

but can I ask? what is the apk file for? is it for other device?

Thank you! The apk is for android  device, you can install  and play it on Android phone or tablet.

Oh , thank you for answering <3

Hi! I updated this game with a bonus CG, check it out if you don't mind :)

I read parted as farted😭

Thank you for a nice game!

I just wanted to say I've really enjoyed the game, it's great! Thanks for making it!

It's short but I liked it I thought it was very interesting and creative.

Shouldn't there be "Romance" tag?

Right, thank you for pointing out! I will update the tag soon.

It's nice. Short but sweet.

Cause I've only played long vn for a while, it felt really relieving a short and cute story like yours. I enjoyed the game a lot, keep the great work !

[Took me a bit more than a hour to finish the the three routes without rushing, in case you need those informations]

Thank you, I'm glad you enjoyed it! The time taken you mentioned was really helpful too, it would give me an idea of how long my future games would be in relative to words count :)

Hi! Thank you for being interested  in the game. This game was supposed  to be a small jam game but the scope had already  bloated up a lot. Currently  I don't have any idea to expand it any further, so it probably  won't  have a sequel.  However  I'm planning  to make my next BL in the same universe, and characters  in this game might appear as cameos.

I hoped to make a little  bonus to this game, but currently  having my hand full with several other projects. Maybe somedays...

I really liked this! The story is interesting. The art is beautiful and all the CGs were so cute <3
The writing does need some editing but I can see you are already planning to fix it. :)

Thank you! I had a lot of fun drawing for this game, but writing were a bit rushed. Proofreading is still on going, hopefully I can update the game soon :D

I really like the whole concept of it. Definitely worth everyone's time. The one thing that I found quite lacking was that how their relationship progress almost seems a bit forced. I don't know, maybe am just a fan of poetic writing and slow burners, but regardless, it was amazing. Looking forward to your other works :p

Thank you! The fast progress was something that bothered me the most when writing the story too. Because  of the story  concept,  there isn't  much time to develop the relationship.  I tried my best to pad it up and added more CGs than originally  planned because of that.

In the end, it was just the beginning of their relationship. I hoped it to looks like two guys go to a blind date and immediately  hit it of (a little  too fast )

I'll try harder in my next game. Thank you for playing!  :)

keep up the work!

your work is so creative and i love the plot story! ^^

Thank you ! I'll try to come up with better story for my next game ^^

I'm sorry,  for now there is no plan for French translation  yet.

If you really want to play you could always try with a text-hooking software like textractor,  which will provide you with a computer generated translation. I've played and enjoyed plenty with the difficult Japanese to English translation, so English or Polish to French should be much easier :)

I just can’t how cute the characters are and the art style makes it even better like believe me I read almost every bl manga and didn’t see such a cute art style in a while. I just finished all the endings and can’t decide which one is cuter the first or the second ending. I’m looking forward to the next games/projects that you make❤️

Thank you! I'm glad you liked it.

When will the game be finished?

Hi, the game was basically finished with full routes out and all CGs  with CG gallery in current build. It's just that the game's English is not really good because I'm not native writer, so I'm waiting for my proofreader to edit it. When they get back to me I will update the script. For now the current build is the best I can do alone.

It was so cute and I liked the art a lot  ❤️

ooooo glad I checked the site today! I noticed this game shortly after the demo was released, attracted by the art and story, and had been waiting for the full game to come out XD will play as soon as I manage.

Thank you! It's embarrassing that the script is still first draft without proofreading, but I will update it as soon as I could.

Hi, is there any way I can support this game?

Hi! Thank you a lot for being interested in supporting the game! Currently I'm mostly concentrating  on finishing this game, so some help spreading awareness about the game on social media would be much appreciated. I'm thankful for donations, but I'm embarrassed of the  current infancy state of the demo. I really look forward to releasing the full game to thanks for everyone's support!

I love this so far! When do you think the full release will be out?? No rush though! :) if it is already where can i find it?

Thank you! Sorry full game is delayed again because I decided to add some extra CGs. It's currently not out yet, when it's finally out I will update this page. I update the progress of my game weekly  on twitter if you don't mind checking it out.

Alrighty! I'll be sure to check it out :)

Very interesting game :D
Saitoki I have a question?
Do you mind if I translate this game into Polish?

Hi, thank you for being interested in this small game! I would consider translation after the whole game had been completed and proofread (in current state it is kinda rough). Would you mind if I host the translation on my page and credit you?

The language modification for the demo version of "The legend of heavenly mist" is now finished, but requires a lot of corrections.

The modification also interferes with the game code by adding the language change option, adjusting the menu to the needs of the Polish language, etc ... adding it to the official version of the game will also make changes in the English version.

Woah, that was so fast.  Do you have a Twitter  account  to DM me so we can discuss a bit more? My handle is Saitoki7

The art is fantastic. Will be waiting for the full release!

I just read the story and find pretty intriguing, when will you plan to release the full version?

I hoped to get it done next week, but probably  the safest release estimate  is probably at the end of  this month so the game can  be throughly  proofread and tested.

Right, so it is almost end of March. Can't wait :D

I'm feeling the pressure D: Might have to delay to the end of Nano.

Thank you! Glad you liked it. I will try to get the full release  out soon.

this is so interesting, cant wait for full release

Thanks, I will try to finish  it soon :) 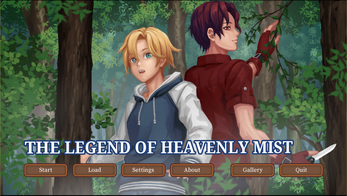 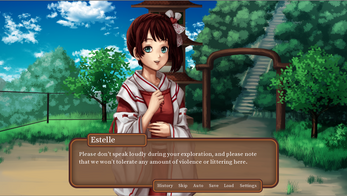 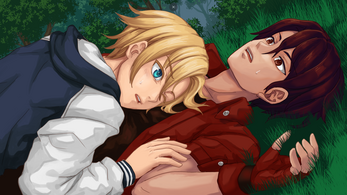 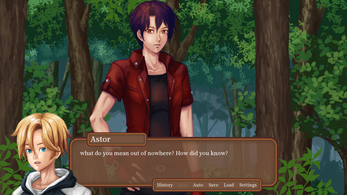